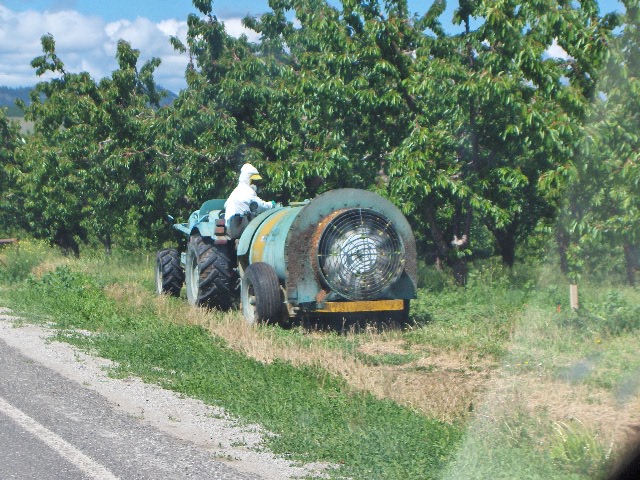 When our workplaces have reliable health and safety protections – whether it’s an office or a construction site, a dairy or an orchard – workers, businesses, and local economies can thrive. When those protections are weak or unenforced, the challenges that farm workers already face at work are exacerbated. Columbia Legal Services is working to improve worker health and safety and improve systems of pesticide notification and accountability in Washington State.

*Video brought to you by Nate Midgley, find more content by Nate here.

Pesticide exposure causes farm workers to suffer more chemically-related injuries and illnesses than any other occupational group in the nation. The Environmental Protection Agency estimates that 10,000-20,000 farm workers nationally are poisoned on the job each year due to pesticide exposure. The Washington Department of Health found that from 2004 through 2013, there were 737 agricultural pesticide illness cases in our state. The actual number of workers sickened by pesticides is far greater. Workers who perform hand labor tasks in areas that have been treated with pesticides face exposure from direct spray, drift of pesticides off-target, or contact with pesticide residues on the crop or soil.

Farm worker families can also be injured by pesticides when workers inadvertently take home pesticide residues on their hair, skin or clothing; or when pesticides drift into residences, schools and other areas located near fields. However, those exposed frequently do not seek medical care for pesticide illness because of lack of awareness of workers’ compensation benefits, lack of health insurance, language barriers, immigration status, cultural factors, lack of transportation, and fear of retaliation for reporting the exposure.

Drift is, by far, the biggest source of farm worker pesticide poisoning in Washington. Columbia Legal Services is documenting the stories of Washington State families exposed to hazardous chemicals at work. Watch the trailer above for Poison Control: Protecting the Health of the People Who Feed Us, a short documentary featuring the personal stories of three farm workers impacted by pesticide drift. Our documentary will premiere on opening night of the Social Justice Film Festival in Seattle on October 14, 2016.

Seven orchard workers filed a lawsuit in Yakima Superior Court in October 2016 against Jones Produce and Ag Air Flying Service alleging they were exposed to pesticides during a crop-dusting application of several restricted-use pesticides. The suit states that on August 27, 2014, Jones Produce hired Ag Air to crop dust its potato field near Mattawa, Washington, however, the pilot allowed the pesticides to drift off-target into a nearby orchard and poisoning the workers.

Safety labels on the pesticides warn applicators, “Do not apply this product in a way that will contact workers or other persons, either directly or through drift.” Shortly after the exposure, the workers suffered a variety of symptoms, including headaches, numbness and tingling in the face and lips, diarrhea, nausea and vomiting, dizziness, shortness of breath, and tightness in the chest.

“The pesticide laws are very clear,” says Joe Morrison, a Columbia Legal Services attorney who represents the workers. “It is a violation to spray in a manner inconsistent with the label and the labels clearly state not to permit drift onto people. It’s unacceptable that hard-working families like these continue to be exposed to hazardous chemicals at work. A simple heads-up call to the neighboring orchard could have avoided this unnecessary human exposure by removing the workers from the area.”

Modesta Arista Gomez and her daughter Rocio Gomez, bravely stood up to share their story and join the lawsuit, along with others, as plaintiffs. “When the plane was passing over us, we didn’t give it a lot of thought,” Arista said. “We were working and doing our jobs. Then we started to smell something really awful. I’ve never smelled anything like it.” Arista alleges that shortly after the spray she began to feel ill, along with many other workers. These two women – along with another woman who suffered from another case of pesticide drift exposure near Wenatchee – share their powerful, first-hand accounts in the documentary.

No worker should have to fear exposure to pesticides or other toxic chemicals at work. Columbia Legal Services is using a multi-pronged approach to help clients fight back against pesticide exposure.

Here are some of our strategies to protect farm workers and their families: