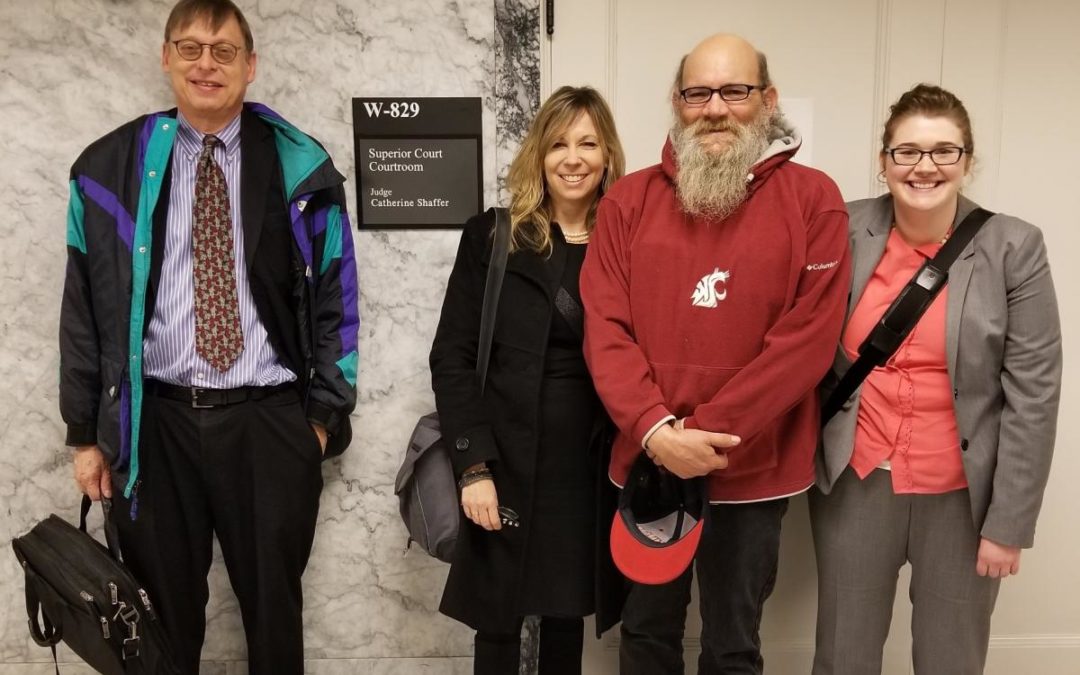 A King County Superior Court Judge ruled this morning in favor of a Seattle resident who had his vehicle, which he used as his home, impounded by the City of Seattle and faced steep fines to get it back. King County Superior Court Judge Catherine Shaffer found that the fees imposed on Steven Long for towing and impounding his car were excessive fines, violating the constitution. The court also ruled that because Mr. Long used the vehicle as his home, and had informed the City of that fact at the impound hearing, requiring him to sign a payment plan to release his home violated the Washington State Homestead Act, RCW Ch. 6.13.

Alison Bilow of Columbia Legal Services and co-counsel Jim Lobsenz of Carney Badley Spellman, who represented Mr. Long, asked the court to dismiss the infraction and successfully argued that the city’s callous action violated the Eighth Amendment to the U.S. Constitution and the constitutionally mandated homestead protections under the Washington State Homestead Act. They argued that the impoundment and excessive fines constituted a grossly disproportionate punishment to the minor civil infraction. They additionally argued that taking Mr. Long’s home and refusing to release it until he agreed to enter into a payment plan for those excessive fees violated the Homestead Act.

The Superior Court judge agreed. She found that Mr. Long’s payment plan for the towing and impound fees was void, and she ordered the Municipal Court to refund to Mr. Long any payments he has already made on the plan.

“There is little societal interest in depriving Mr. Long of his only shelter, leaving him to continue living in public spaces under a tarp,” said Bilow, an attorney with the Basic Human Needs project at Columbia Legal Services. “The City of Seattle should not be in the practice of exacerbating the homelessness crisis by taking people’s homes. This important decision may have a far-reaching impact, providing relief for many other people in our community who are struggling and choosing to make vehicles their homes in an effort to survive this affordable housing crisis.”

Mr. Long, a 57-year-old Seattle resident, had been using his truck as a home since he was evicted in 2014 for late rental payments. In the summer of 2016, it broke down so he parked it out of the way in an unused gravel lot near Rainier Avenue and Dearborn. After returning home late one night from his job cleaning the stadium after a Seattle Sounders match, he discovered that the city had impounded his truck for parking for longer than 72 hours. Along with losing his home, he lost the tools of his trade in plumbing and construction and other essentials like a winter jacket, food, and money. He was without his only home and shelter for 21 days.

While the city didn’t charge him with a crime, they took his home – his most valuable asset – and left him to sleep in the same location on the ground under a tarp. He was only able to secure the release of his home weeks later by agreeing to fees and fines which are overwhelming to a person experiencing homelessness.

“As the Court noted, due to the rising cost of housing, more and more people are being forced to live in cars and boats,” said Lobsenz, an attorney with Carney Badley Spellman. “The Washington Constitution and the Washington Homestead Act protect people who live in conventional houses from the attachment of their homes as security for a debt. We are pleased by the Superior Court’s decision that recognizes that “houseless” people who are forced to live in their vehicles are a protected by our state laws from the attachment of their homes, and from excessive fines imposed upon them as a penalty for a minor parking infraction.”

This case has implications for others without means who aren’t able to afford stable housing and turn to using their vehicles as their homes. Seattle municipal judges should follow this ruling. The Superior Court has made it clear that the fees and fines imposed for an impound must not be excessive for an individual experiencing homelessness, and vehicles used as homes may not be subject to forced sale to pay a towing debt.

Real ChangeAshley Archibald, Homeless people living in vehicles are often at odds with police, parking enforcement and impound lotsJuly 25, 2018
Raw StoryMartin Cizmar, This Seattle man won the constitutional right to live in his truck — it could be the start of a revolution in how we handle the homelessMay 10, 2018
HeraldNetLizz Giordano, After ruling, police are cautious about towing vehicle-homesMay 7, 2018
My NorthwestCarolyn Ossorio, Attorney: Seattle must acknowledge a car can be a homeApril 24, 2018
Real ChangeAshley Archibald, The city of Seattle spent nearly $225,000 to tow and destroy people's homesApril 4, 2018
Los Angeles TimesRick Anderson, Seattle judge rules a homeless man's truck was his 'home,' and that has city officials worriedMarch 10, 2018
Seattle PIDaniel DeMay, Seattle will fight court ruling supporting car dwellersMarch 8, 2018
The Seattle TimesDanny Westneat, Coming soon to Seattle: a constitutional right to campMarch 7, 2018
NPRLaurel Wamsley, A Homeless Man's Truck Is His Home, Judge Rules In SeattleMarch 6, 2018
KOMO NewsMichelle Esteban, Seattle man wins case against city after truck he lives in was impoundedMarch 5, 2018
KIRO7Deborah Horne, Judge declares Seattle man's truck 'his home'March 5, 2018
Q13 FOXSteven Kiggins, King County judge’s ruling shines spotlight on homeless living in vehiclesMarch 5, 2018
The StrangerHeidi Groover, When a Vehicle is a Home, City Must Reconsider Tow Fees, Judge RulesMarch 5, 2018
Seattle PIDaniel DeMay, Ruling: If you live in a car, it's your homeMarch 5, 2018
The Seattle TimesVianna Davila, Judge rules Seattle homeless man’s truck is a homeMarch 3, 2018