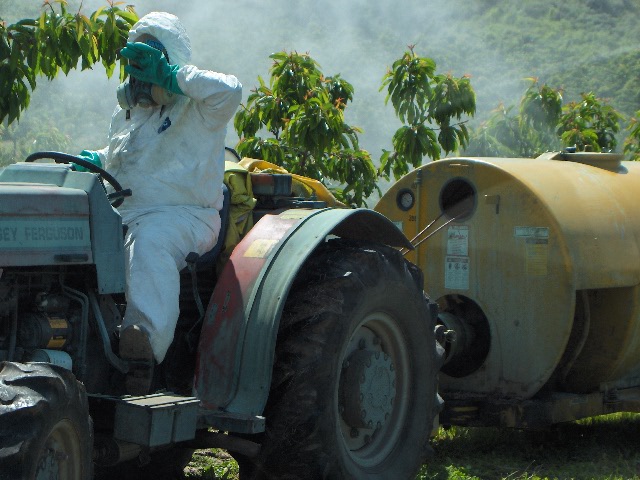 Cases of pesticide illness are on the rise in Washington. When pesticides applied in one location drift and land on people working nearby, exposure can cause immediate and long-term illness. A new report by Columbia Legal Services and the Northwest Center for Alternatives to Pesticides, Human Exposure to Pesticide Drift: Washington State Report, investigates pesticide drift in Washington and suggests protective measures.

Department of Health reports indicate 90% of the people exposed by drift were not employed by the farm that applied the chemicals. Farm workers and their families – who have limited access to medical care – bear the burden of a disproportionate amount of risk associated with pesticide use. This report includes personal stories of farm workers whose health has been negatively impacted by drift, background information on health risks associated with pesticides, and an overview of efforts to reduce exposure by drift.

Soccoro Díaz experienced pesticide illness in 2011, after pesticides drifted onto her and her coworkers. “Before they sprayed me, I was fine. Afterward, I felt pressure in my head and it hurt…Now, five years later, I still have bad headaches that can last for weeks,” said Díaz.

Common-sense measures can protect human health and working families from the harmful impacts of pesticide exposure. The report recommends that Washington State should immediately require prior notification of neighbors for pesticide application prone to drift, establish and enforce buffer zones around pesticide spraying, increase penalties related to overspray, and expand education for farm workers and applicators.

During the current 2017 Washington State legislative session, advocates have been pushing for the passage of the Pesticide Exposure bill (HB 1564), a law that requires pesticide applicators to simply inform their neighbors so that they can protect themselves and their workers from pesticide exposure. A House committee held a hearing for the bill on February 17, but failed to take a vote on it. Farm workers impacted by pesticide drift and a coalition of advocates who support them will be in Olympia again today as part of Latino Legislative Day and the Farm Worker Tribunal to share this report and continue the fight for sensible notification measures that protect Washington workers.

In addition, the United States Environmental Protection Agency (EPA) should take immediate action to include direct drift and inhalation exposures in its risk assessments for pesticide label requirements; and address drift exposure under the standards required by Congress in the Food Quality Protection Act (FQPA).