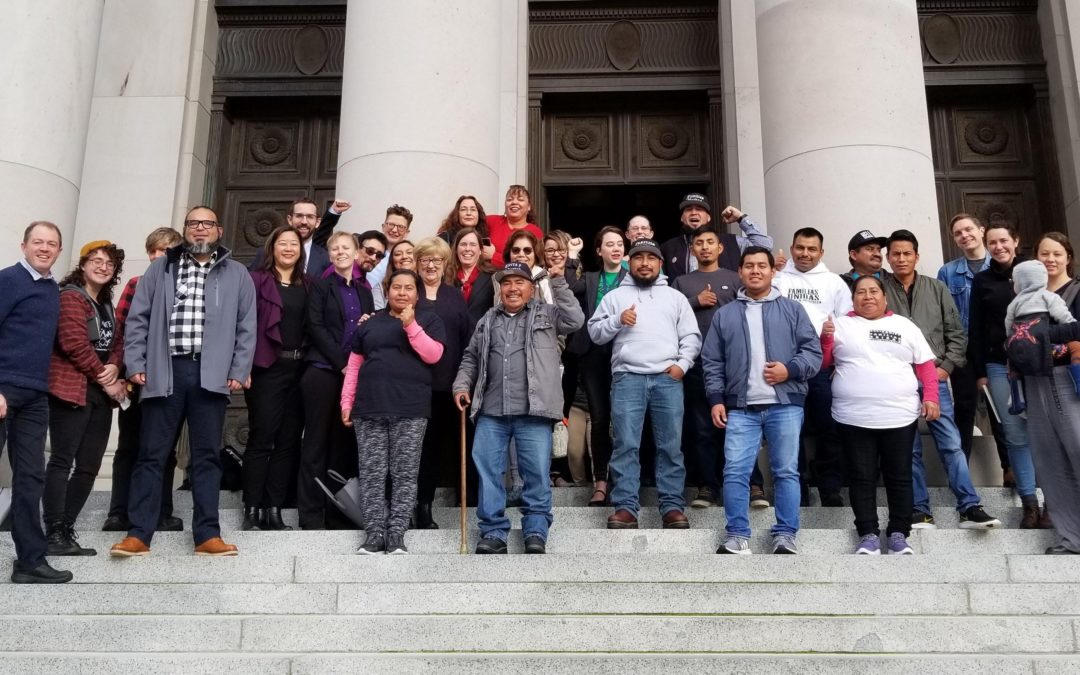 n a 5-4 decision that Washington’s 60-year exclusion of dairy workers from overtime pay after 40 hours of work is unconstitutional because the Washington State constitution contains “a fundamental right for Washington workers to health and safety protections” that is embedded in overtime laws. The majority opinion held that the exemption violates the “privileges and immunities” clause of the State constitution, reasoning that the Legislature granted an unconstitutional privilege to agricultural employers by exempting them paying overtime to farmworkers who “work long hours in conditions dangerous to life and deleterious to their health.”

The lawsuit was filed by two dairy workers, Jose Martinez-Cuevas and Patricia Aguilar, both of whom milked cows for DeRuyter Brothers Dairy, Inc., which owned and managed a large dairy operation in Outlook, Washington, with a herd of over 5,000 milking cows. Columbia Legal Services (CLS) and the Seattle law firm Frank Freed Subit & Thomas LLP represent the workers. The workers alleged they worked nine to twelve hours a day, six days a week, without the benefit of paid rest breaks, meal periods, or overtime pay. The company previously settled the meal and rest break portion of the case.

The Court held that the exemption implicated a fundamental constitutional right to statutory protection for health and safety in dangerous industries, under article II, section 35, and there was no reasonable ground for the exemption, rejecting the dairy farmers’ argument that the seasonal nature of farming justified the exemption from overtime pay. As the majority opinion noted, “[D]airy work is some of the most hazardous in the United States,” and “[o]vertime work is particularly injurious.”

“I am very happy we have made the future better – the work is very hard and very dangerous,” said class representative Patricia Aguilar. “This is an incredible victory for farm workers in Washington state,” said Jose Martinez, the other plaintiff in the case. “I’ve had to work lots of overtime hours under very dangerous conditions – just like thousands of other workers around the state. We deserve to be treated like other workers in dangerous industries and be paid fairly for our work.”

The Court’s ruling means that the group of approximately 300 workers in this case is entitled to relief on their overtime claims. In addition, while the majority declined to address whether its decision otherwise applied retroactively, it could impact overtime pay for over 200,000 farm workers across Washington State. As noted by the four dissenting justices, “Based on the majority’s ruling, farm workers will now be entitled to future overtime pay, a substantial benefit.”

“We appreciate the Washington Supreme Court’s decision that recognizes that dairy workers have a right to the same protections as other workers in dangerous industries,” said Lori Isley, attorney with Columbia Legal Services, who argued before the Court last October. “Our clients are equally deserving of overtime pay. Studies have shown that employing workers beyond 40 hours a week causes injury rates to increase, so requiring that employers pay a premium for such work deters use of overtime.”

“Overtime laws are meant to protect workers from long hours that are harmful to their health,” said Marc Cote of Frank Freed Subit & Thomas LLP. “Employees in factories and other dangerous industries are protected under our state’s overtime law, but farm workers have been left out of these protections for decades and must work long hours without overtime pay. We believe the Washington Supreme Court’s opinion today will make overtime pay protection a reality for thousands of laborers who do dangerous agricultural work.”