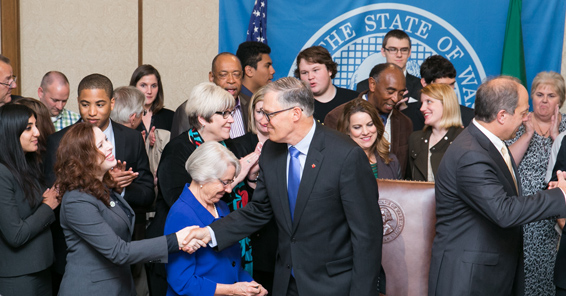 On May 14, 2015, Washington Governor Jay Inslee signed into law a major change to the way the legal system treats former juvenile offenders. SB 5564 will abolish most of the millions of dollars of court costs, fees, and fines levied against juveniles in Washington. Every year, more than 10,000 youth who have made childhood mistakes will no longer be held back by debts they have no hope of paying. Youth will also benefit from the expansion of access to juvenile record sealing. The YEAR Act was sponsored by Senator Steve O’Ban (R-Pierce County) and Representative Ruth Kagi (D-Seattle), and passed with nearly unanimous support in both chambers.

“We want the system to be consistent and offer an opportunity to find work, to find housing, to have a true opportunity for that second chance,” said Sen. O’Ban. “At one time or another, everyone hopes for a second chance in their lives. An essential component to giving juveniles, who have not committed serious crimes, a true second chance is by not allowing their records to follow them to every job interview and application for housing. We want to remove barriers that prevent them from getting on with their lives and getting the opportunity to be rehabilitated.”

“Being poor isn’t a crime. And it shouldn’t mean a life sentence,” remarked Rep. Kagi in a floor speech discussing the bill. “Justice is about accountability, compassion, and equality. The YEAR Act accomplishes all three. And juvenile justice is most successful when all children, rich or poor, reintegrate into society and become active, law-abiding, contributing members of their communities. Right now, this opportunity is only available to youth who can pay. The YEAR Act will help build a juvenile justice system that works for everyone, not just the wealthy few.”

While most states treat juvenile records as confidential, Washington State does not. This means Washington youth are uniquely locked out of employment, housing, and post-secondary education. Prior to the Act, sealing of juvenile records could only take place if juveniles had paid all fines and fees, at 12% interest, but youth often had no way to do so. Now, in addition to removing most fees, victims will be paid first, interest will not be collected, and courts may seal the records of juveniles who have paid individual victims.

Five students from the University of Washington Child and Youth Advocacy Clinic, working in collaboration with Columbia Legal Services, led the charge for the bill.

“I want to earn a life of living instead of a life expecting to die,” testified Solinuu Leae, a young person at Green Hill Academic School, in support of the bill. “I think everyone who learns to work hard and is trying to make changes deserves a second chance and a fresh start. This bill will help. This is the next step of helping today’s future, which is the youth of yesterday and tomorrow.”